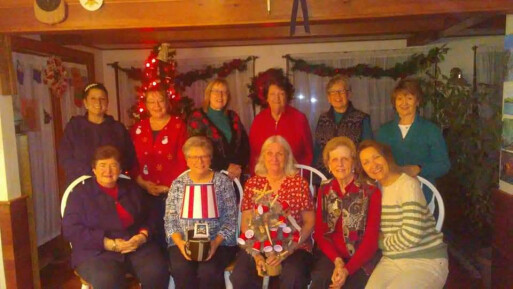 Not Just Another Book Club

The Sister Circle Book Club is as busy as ever, just look at the list of books we have read together I was thinking about the saying, ‘One man’s trash is another man’s treasure’ and I realized that this can apply to books also. Some books become one person’s treasure – I loved it, I liked it – it inspired me etc. Whereas another book is someone else’s trash – I disliked it, the story was too sad, I got mad reading it especially when…etc. Our meetings encourage everyone to share their opinion whether positive or negative. Whatever the opinion, these books all reflect aspects of Christian life and can be used to encourage, disciple and reach others. Many of the ladies in the book club share the books with their work mates, family and friends. As always, the group is open and welcoming to new visitors, whom we hope will enticed to stay. We want to see our group grow, so come on and check us out! Joanne.

For the month of October the ladies are reading "The Book of Lost Friends " by Lisa Wingate. We will meet to discuss this book on Monday, November 1  at 7:00 pm in the Library of the Office Building. Hope to see you there. We want our little circle to grow!

About this month's selection 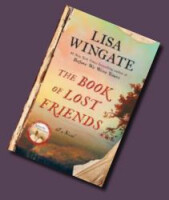 Louisiana, 1875: In the tumultuous aftermath of Reconstruction, three young women set off as unwilling companions on a perilous quest: Lavinia, the pampered heir to a now-destitute plantation; Juneau Jane, her illegitimate free-born Creole half-sister; and Hannie, Lavinia's former slave. Each carries private wounds and powerful secrets as they head for Texas, following dangerous roads rife with ruthless vigilantes and soldiers still fighting a war lost a decade before. For Lavinia and Juneau Jane, the journey is one of inheritance and financial desperation, but for Hannie, torn from her mother and eight siblings before slavery's end, the pilgrimage westward reignites an agonizing question: Could her long-lost family still be out there? Beyond the swamps lie the seemingly limitless frontiers of Texas and, improbably, hope.

Louisiana, 1987: For first-year teacher Benedetta Silva, a subsidized job at a poor rural school seems like the ticket to canceling her hefty student debt--until she lands in a tiny, out-of-step Mississippi River town. Augustine, Louisiana, seems suspicious of new ideas and new people, and Benny can scarcely comprehend the lives of her poverty-stricken students. But amid the gnarled live oaks and run-down plantation homes lies the century-old history of three young women, a long-ago journey, and a hidden book that could change everything.

Lisa Wingate is the author of the #1 New York Times bestseller Before We Were Yours, which remained on the NYT Bestseller List Hardcover and softcover lists for 110 weeks and has sold more than three million copies. She has penned over thirty novels and coauthored a nonfiction book, Before and After with Judy Christie. Her April 2020 novel, The Book Of Lost Friends, became an instant New York Times Bestseller. The story follows an unlikely trio of girls coming of age as they embark on a perilous journey through reconstruction Louisiana and Texas… and a modern-day teacher in small-town Louisiana who rediscovers their story. The Book Of Lost Friends was inspired by the real-life “Lost Friends” ads, through which families separated during slavery sought to find their lost loved ones in the chaos following the Civil War. A reader and museum volunteer from the Historic New Orleans Collection connected Lisa with HNOC’s vast database of over 2500 Lost Friends ads, which chronicle the heart wrenching and hope-filled searches of separated families, and which inspired the story of eighteen-year-old Hannie Gossett in the novel.

Lisa lives with her husband in North Texas. More information about her novels can be found at www.lisawingate.com.

The Sister Circle by Vonette Bright and Nancy Moser
The Amethyst Heart by Penelope J. Stokes
The Note by Angela Hunt
Leota’s Garden by Francine Rivers
Eyes of Elisha by Brandilyn Collins
Hidden Places by Lynn Austin
Thorn in My Heart by Liz Curtiss Higgs
A Rush of Wings by Kristen Heitzmann
Unafraid by Francine Rivers
Round the Corner by Vonette Bright and Nancy Moser
Not a Sparrow Falls by Linda Nichols
Cape Refuge by Terri Blackstock

Summer of Light by W. Dale Cramer
The Mill House by Paul McCusker
Flies on the Butter by Denise Hildreth
Dark Water by Linda Hall
Moon in the Mango Tree by Pamela Binnings Ewen
Love Comes Softly by Janette Oke
Black Ice by Linda Hall
The Shape of Mercy by Susan Meissner
The Outsider by Ann H. Garhart
The Centurion's Wife by Davis Bunn & Janette Oke
Until We Reach Home by Lynn Austin
Healing Waters by Nancy Rue and Stephen Arterburn

The Queen of Sleepy Eye by Patti Hill
Whispers of the Bayou by Mindy Starns Clark
Journey to the Well by Diana Wallis Taylor
From a Distance by Tamera Alexander
Though None Go With Me by Jerry Jenkins
June Bug by Chris Fabry
Though Waters Roar by Lynn Austin
Shadows of Lancaster County by Mindy Starns Clark
The Hidden Flame by Davis Bunn & Janette Oke
John 3:16 by Nancy Moser
The Believer by Ann H. Gabhart
Here Burns My Candle by Liz Curtis Higgs

Never Say Never by Lisa Wingate
Sixteen Brides by Stephanie Grace Whitson
Beguiled by Deeanne Gist and J. Mark Bertrand
Her Mother's Hope by Francine Rivers
Her Daughter's Dream by Francine Rivers
Ransomed Dreams by Sally John
While We're Far Apart by Lynn Austin
Pearl In The Sand by Tessa Afshar
Angel Sister by Ann H. Gabhart
Mine is the Night by Liz Curtis Higgs
The Summer Kitchen by Lisa Wingate
The Damascus Way by Davis Bunn and Janette Oke

Paradise Valley by Dale Cramer
The Sweetest Thing by Elizabeth Musser
The Girl in the Gatehouse by Julie Klassen
A Shepherd's Rod by Cris Pfeil
Bound By Guilt by C. J. Darlington
A Sound Among the Trees by Susan Meissner
Resurrection in May by Lisa Samson
Wonderland Creek by Lynn Austin
Larkspur Cove by Lisa Wingate
The Daughter's Walk by Jane Kirkpatrick
The Captive Heart by Dale Cramer
Promise Me This by Cathy Gohlke

Band of Sisters by Cathy Gohlke
Jimmie by Robert Whitlow
Wildflowers From Winter by Katie Ganshert
Return to Me by Lynn Austin
When Mockingbirds Sing by Billy Coffee
Against the Tide by Elizabeth Camden
The Air We Breathe by Christa Parrish
A Beauty So Rare by Tamera Alexander
Wildwood Creek by Lisa Wingate
A Fall of Marigolds by Susan Meissner
Dear Mr. Knightley by Katherine Reay

A Sparrow in Terezin by Kristy Cambron
The Color of Justice by Ace Collins
Not By Sight by Kate Breslin
On This Foundation by Lynn Austin
Thief of Glory by Sigmund Brouwer
The Mountain Midwife by Laurie Alice Eakes
Bathsheba by Angela Hunt
Water From My Heart by Charles Martin
Counted With the Stars by Connilyn Cossette
Dauntless by Dina L. Sleiman

A Daring Venture by Elizabeth Camden
Under a Cloudless Sky by Chris Fabry
Legacy of Mercy by Lynn Austin
Thief of Corinth by Tessa Afshar
These Healing Hills by Ann H. Gabhart
A Desperate Hope by Elizabeth Camden
Phoebe's Light by Suzanne Woods Fisher
The Curse of Misty Wayfair by Jaime Jo Wright
A Light on the Hill by Connilyn Cossette
The Memory House by Rachel Hauck
The Refuge by Ann H. Gabhart

The Refuge by Ann H. Gabhart
Becoming the Talbot Sisters by Rachel Linden
The Bridge to Belle Island by Julie Klassen
The Sister Circle by Vonette Bright and Nancy Moser
The Last Sin Eater by Francine Rivers